By Magdy Elkafrawy and Mohamed Abdelaziz for SIAF

Magdy ElKafrawy explains the content of his graffiti art project by saying, "The Islamic heritage continues to be one of the most important sources of visual inspiration for many artists in all aspects of creativity. Hence, under this unprecedented celebration, each of us is ought to express appreciation for the inspiration we receive from this art and its manifestations and impacts. Under the continuous search process taking place as part of our endless journeys into the depths of this artistic effect, which is full of secrets at all visual, technical, and semantic levels, I see many pressing ideas that prompt us to reformulate what is related to our Islamic heritage.

The main idea behind my project is to introduce Islamic art in a way that is compatible with modern art. My mural is based on the use of Islamic vocabulary in its known form or through visual gestures that suggest its existence by using different raw materials, such as Arabesque, Khyamia (patchwork) and others, in a huge work that combines graffiti and mural."

When it comes to the artist Mohamed Abdel Aziz, he addresses absolute beauty through his expressive language, which takes the form of graffiti art. He visually designs a verse by the poet Nizar Qabbani in authentic Arabic calligraphy that occupies the center of his mural, thus creating an aesthetic space in which the sensitivity of the audience and their passion for beauty are caressed. Abdel Aziz believes that the Arabic character has the ability to express the self and its different situations.

Most of the Arabic calligraphy works have meanings and messages, and addressing the Arabic character is not limited to the highlighting their aesthetics, but it takes on a new direction in this sense, which has a profound impact on the delivery of ideas that might be difficult to communicate. Those interested in plastic art movement, especially graffiti and street art, find that the Arabic alphabet tops many of the Arab and Western buildings. However, the structure of Arabic character has a clear impact on the speakers of foreign languages because of the visual work that deals with the character in contemporary visual visions that stimulate its aesthetic energies; hence, we recognize the impact of the Arabic character in the receiving mechanisms.

Magdy ElKafrawy is a member of the Fine Artists Syndicate in Egypt and a member of the Journalists Syndicate. He is also a member of the Cairo Atelier for Writers and Artists. ElKafrawy is a painter and a press editor at the Rose Al-Youssef Foundation. He holds a B.A. In Art Education and has participated in many international art exhibitions. He has held many solo exhibitions that reflect a clear picture of the stages of his artistic experience. ElKafrawy depicts the human spirit in its different manifestations, where we see the diagnosis present in his work – especially the woman, through which he expresses the human situations, emotions, values ?? and secrets.

Mohamed Abdel Aziz holds a Bachelor of Arts from the Faculty of Applied Arts at Helwan University, Cairo. His first group exhibition is entitled Graceful Letter, Cairo. He participated in Arabic Graffiti exhibition at the Pergamon Museum, Germany. He designed many logos and visual identities for companies and organizations inside and outside Egypt. He participated in 3 Letters exhibition in Newcastle, England, where he held an individual exhibition entitled Dancing Characters. Moreover, he participated in the Afro-Chinese Festival in Cairo. 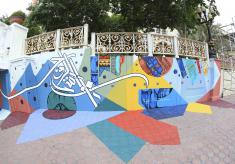 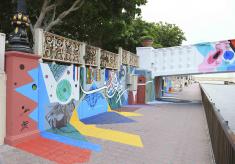